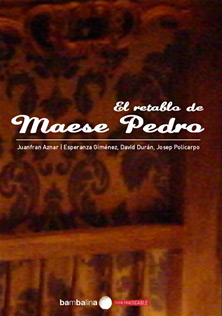 The Maese Pedro puppet show (El retablo de Maese Pedro) is one of the most important reference points for the Spanish puppet theatre of the 20th Century. The premiere of this chamber opera for puppets in Paris in 1923 was the result of the collaboration between Manuel de Falla and a small group of Spanish artists all linked to the artistic vanguards. Creative artists as important as García Lorca and Buñuel participated in both the stage conception and in subsequent versions of the work.

In 1996 there arose the possibility of tackling this piece in collaboration with the Grup Instrumental de Valencia and musical direction by Joan Cerveró. Our version of El Retablo has acquired a certain importance on the musical circuits and in collaboration with numerous national and international orchestras for presenting the show in cities such as Valencia, Granada, Córdoba, Santander, Lyon, Montpellier, Arles, Poitiers, Miyazaki etc. A new collaboration route was opened in 2005 with the Institut Valencià de la Música for co-producing an educational version of this same piece.