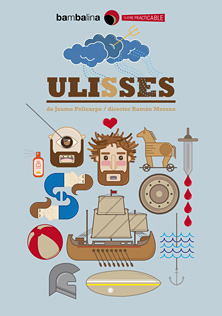 The Greek gods dwelt on the peak of Mount Olympus and they reigned over mankind, exerting their influence by protecting them or abandoning them to their fate. Some men dared to challenge their capriciousness and fell victim to their wrath. Such was the fate of Ulysses, who offended Poseidon by blinding his son Polyphemus, and so Poseidon prevented him from returning to Ithaca, leaving him wandering aimlessly through the expanse of the Mediterranean.

The story of Ulysses is a story of a journey as a metaphor for life, for the struggle against adversity and the manner of overcoming it.

Our actors are gods over a board upon which they direct the actions of the Greek hero. They condition and guide Ulysses’ journey, while also being part of the journey itself. They control his destiny as the manipulators of his actions, but they are also his companions on this journey. They help him to discover worlds and discover them themselves. They are aware of the story they are telling, one known by all, but they are surprised by everything that occurs. It is a journey full of unique adventures, of strategies packed with incident, of shared game-playing, where each act and each scene is a universe in itself. We have begged Ulysses to allow us to follow him once more on his search for his Ithaca, so that we may also find ours.