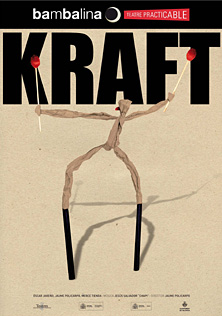 Trees give us shade, fruit, flowers, medicine, oxygen… and paper.

We were asking ourselves where the soul of a tree converted into paper could be hiding. One thing occurred to us: make the folds sing. This gave us some sounds that led us to notes for a primary musical scale, the tone of which, once unfolded, magically rebuilt the rustling of the leves in the trees, the murmur of waves on the seashore, the crackle of fire or the thunder of a summer storm.

No longer can we put off the need for a playful and vital spectacle that will simply deal with our love for things and people. Quite simply, letting us move on, without artifice or ambiguities without great pretensions. And that is what gave rise to Kraft, like a primary idea, like a kid’s thought, by pilimg up paper and cardboard for a big game.